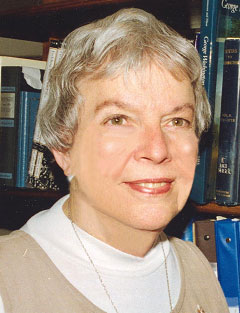 Paula S. Felder is descended from Ludwig Bottner’s son George Boatner of Newberry County, S.C. and his son John W. of Tippah County, MS. who was her great great grandfather. A former business writer and editor who developed information programs for service organizations, she has lived in Fredericksburg, Virginia since 1976.

Most of the data gathering for LUDWIG BOTTNER AND HIS SONS: The Beginning of the Boatner Family in America was done in the years prior to her move, where in her former home in Northern Virginia, she had access to the census and genealogical records of the U.S. Archives. She also collected South Carolina local histories and hired researchers to track early Boatner records. On visits to the state’s archives, she found new documents which filled in some of the gaps in the original immigrant’s years in the South Carolina back country.

She also benefited from close working relationships with several dedicated Boatner genealogists. In all, there are probably more than 3,000 entries in the genealogy tables. (And more can be accommodated by entries contributed to Boatners.com.)

In Fredericksburg, she found intact original records for the area dating back to 1722. For several years, she set aside the Boatner work to research and to write a Colonial History of Fredericksburg and Spotsylvania County, which she published in 1982.

This experience enriched her final work on the Boatner history. The coincidental opportunity to study such contrasting cultures afforded a broader perspective in the writing of both books.

After the publication in 1985 of the “Boatner Book,” as it has come to be known, she returned to a more detailed accounting of colonial Fredericksburg, a commercial river port with a lively culture influenced by the Scottish merchants and the local gentry.

It is also notable as the home base for the young George Washington, who first resided with his family in a farm across the river before he inherited Mount Vernon from his older brother.

The Fredericksburg homes of his mother, Mary, brother, Charles, and sister, Betty, all still stand. Betty was married to the county leader and patriot, Fielding Lewis, who was a close associate of his brother-in-law George Washington and director of the local war effort. Her research into these interesting connections lead to the publishing in 1998 of her third book Fielding Lewis and the Washington Family.

Paula S. Felder remains active in historical research and is in the process of publishing a series of articles on the history of Fredericksburg.